Beverley Fitzwilliam Harries is one of the most admired artists living and working in the country today. Admirers of Beverley’s distinctive style will not be disappointed by the pieces featured in her upcoming show, at 101 Art Gallery, opening on October 14th at 10am to two in the afternoon. Featured are the stylized figures in settings and poses evoking Caribbean life that we have come to associate with a Harries piece. Beverley’s use of color is bold and brash, and the effect is riveting. Her botanicals are represented in a riot of color, and even manicured landscapes take on a wild, primeval and untamed air under her brush. They are luscious and vivid, and they draw one inward.

It is always interesting to witness the evolution of an artist, and Beverley is unafraid of experimentation. Having attended a workshop in Barbados on poured painting hosted by Canadian artist Arial Lyons last January, Beverley returned home and began her own experimenting with the method; and the results are stunning.

Says the artist about these new pieces: “I pour with acrylic paints, both heavy and light flow acrylic. The acrylic is mixed with an extender and water, or sometimes just water. There are several different pouring techniques, the one I use is called a “dirty cup”, that’s how you get the “melee of colour.” There is also a swipe technique which I used in several pieces in order to get some definition and create semi abstract effect.”

Beverley explains that in some pieces she paints on top of a pour. In the work “Bush Fire” the artist painted in the bushes in the foreground in order to bring details into focus. The artist adds that the work “Chancellor Fire” is an example of another poured piece where she went in with a brush and painted in the distant fire in the hillside. The new poured work features colour that builds and blends lusciously, lending a very liquid feel to the work. The pieces are at once soothing and startling and possess something of an emotional force.

Beverley says always had a strong appreciation for Art throughout her primary and secondary schooling, therefore studying Fine Art in Canada with a Painting Major seemed a natural choice. Since 1975 Beverley has taken part in several group and collective shows in Canada, Barbados and Trinidad and has had several successful solo shows both in St. Lucia, and here at home. The artist’s work is part of many private collections internationally and to date she had held six solo shows. 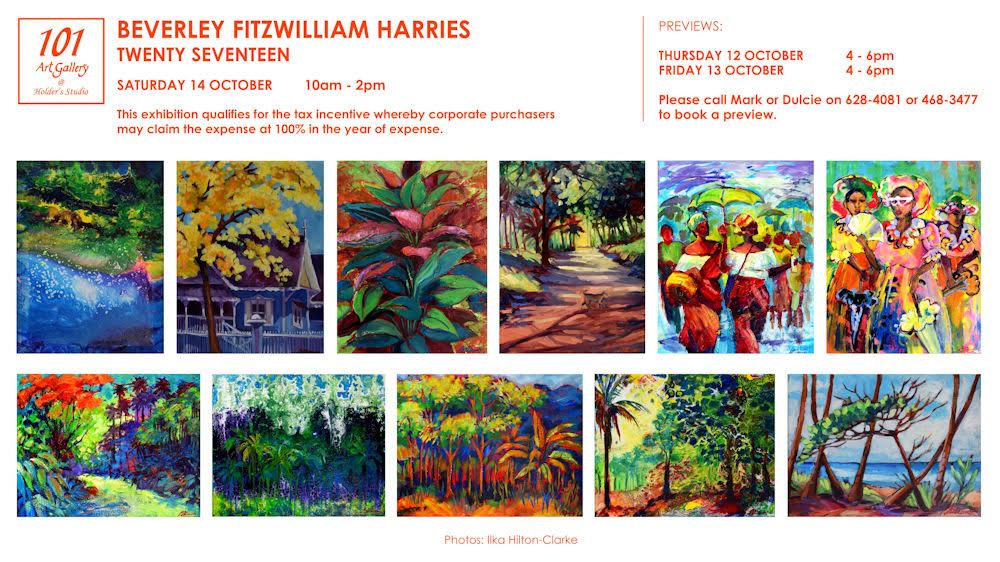