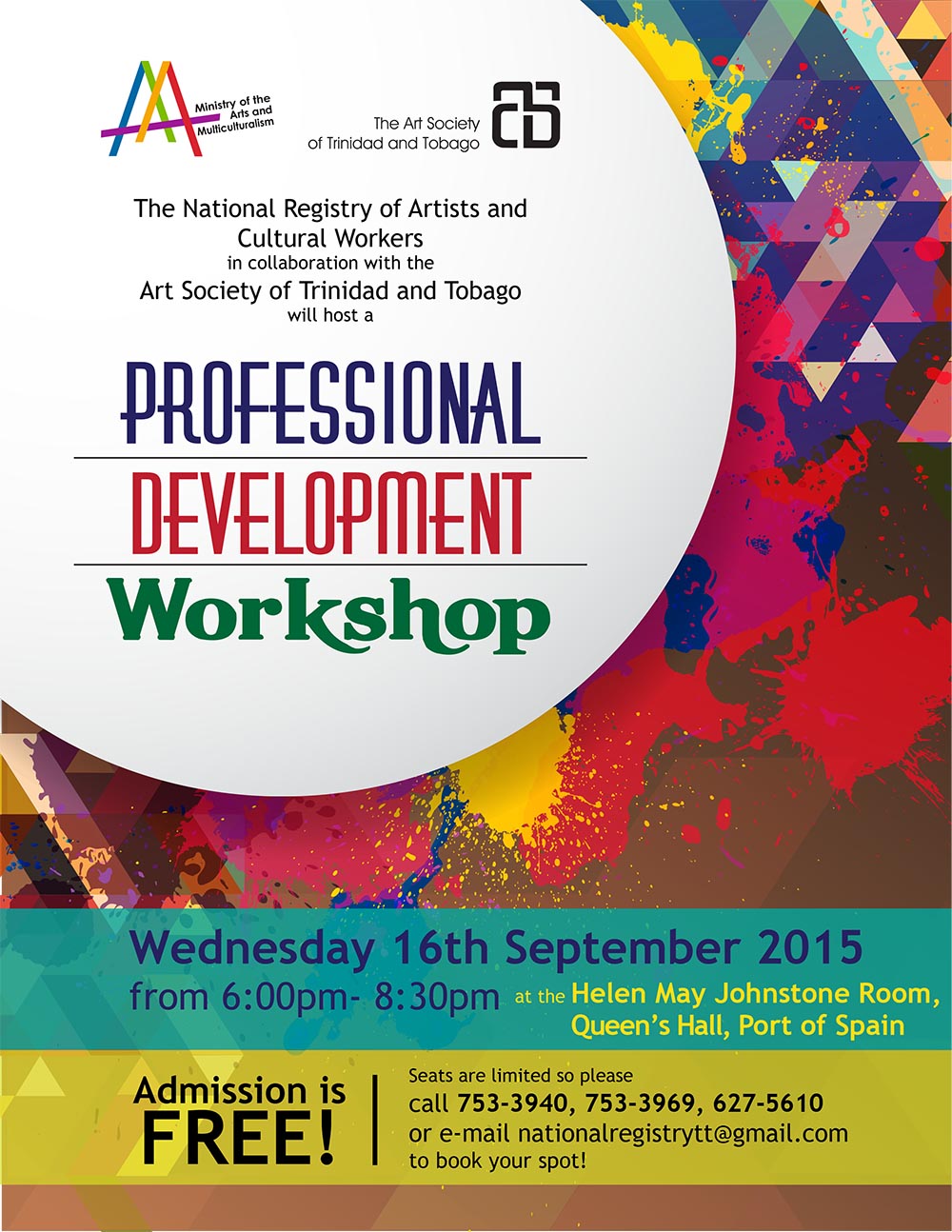 => Information on our new digital interface

=> Discussion on his career as a designer in Carnival Arts

=> Highlight work being done in our Mentoring by the Masters programme

=> To underscore the importance of documenting your work (portfolio building) and representing yourself as an artist in a dynamic way in an effort to access opportunities.

– Clayton de Freitas: Applying artistic skills to scope of work as President of the Art Society

– Che Lovelace: Branching out as a visual artist into other areas of the creative sector

Born in the 1930s to Venezuelan parents, Narcenio Gomez better known as Señor Gomez is one of the leading wire benders (sculptors) in Trinidad and Tobago. He has been designing, bending wire and making costumes for over 50 years. His expertise has been sought after by academic institutions and cultural organisations worldwide. Mr Gomez will also share his wire bending and mas making skills in the area of Carnival Arts.

In 2013 Munroe was granted a solo exhibition at the National Art Gallery of the Bahamas, which made him the youngest artist to be awarded a national show at the institution. The revolutionary exhibit “Swan Song of the Flamingo” went on to receive international acclaim.

Clayton de Freitas, artist, was born in Trinidad in 1962, and grew up in the city of Port Of Spain among Victorian styled homes known as Gingerbread houses. Clayton has been a lover of the arts since childhood

For many years, Clayton resided in the Netherland Antilles, on the islands of St. Maarten and Saba where he was involved in several activities such as teaching Creative Writing full time at both primary and secondary levels and Art at all levels from Grades 1 through 6. He was also responsible for developing a social studies teaching programme for primary schools. During his stint in the Antilles, he exhibited for a foreign group exhibition in Eustatius.

Years later, when Clayton returned to Trinidad, he continued to immerse himself in social work with drug rehabilitation programmes and the Twelve Steps Group with prisoners. He also taught Art Therapy and Anger Management techniques at all prisons in Trinidad.

Clayton exhibited many times both at solo exhibitions and in conjunction with other renowed artists in Trinidad and Tobago. This water colorist is known for painting vintage home and nature scenes in his unique style paints from very large panels to miniatures.

Clayton, over the years, has remained true to the art of water colours. His collections, year after year, ring nostalgia, of places and time long gone that are but a memory to many. His work has been sold not only throughout the Caribbean, but his pieces reside in collections in both North America and Europe.

One interesting dimension to Clayton’s talent is that, although visually impaired, Clayton paints without glasses. The art of perspective calls for the use of both eyes and this Clayton has defied!

Clayton has been involved with the curatorship of art shows in Trinidad. Of special mention, he was asked to curate the charity auction of fine art works in aid of Port Of Spain’s restoration of Roman Catholic Cathedral.

The artist has also been involved in the carnival creations working with Brian Mac Farlane, one of the Trinidad’s most successful carnival band leaders.

Currently, Clayton is the President of the Art Society of Trinidad and Tobago, and also the Public Relations Chair.