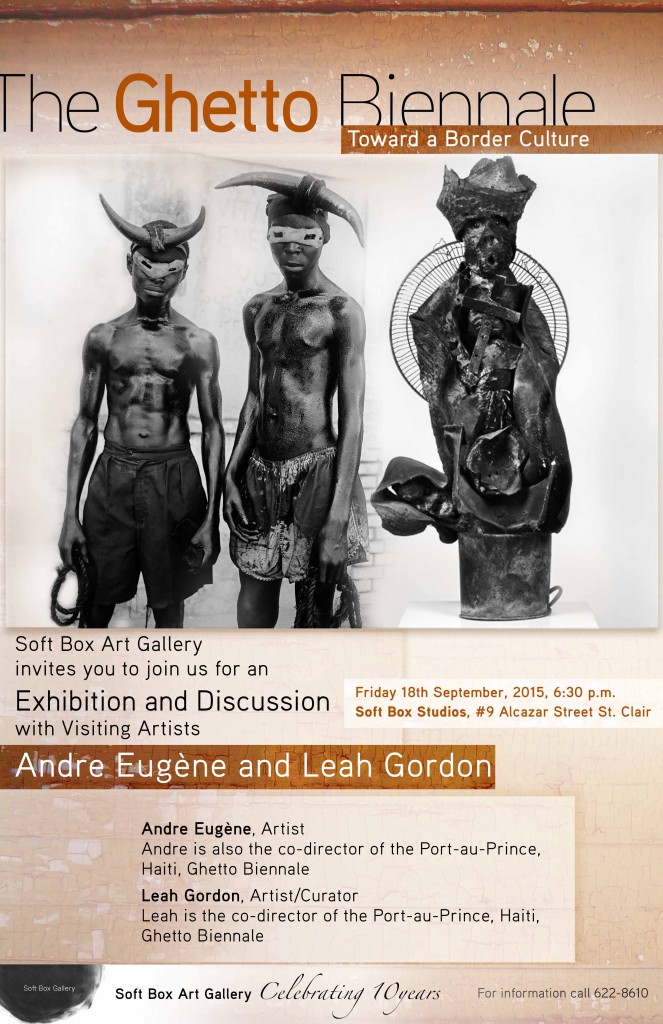 You are invited to attend an exhibition / discussion with visiting Contemporary Haitian artist Andre Eugène and British curator Leah Gordon
on Friday 18th September 2015 from 6:30 pm at Soft Box Studios, 9 Alcazar Street, St. Clair.
Discussion will start at 7:15pm.
Andre Eugène was born in downtown Port-au-Prince in 1959. He is a leading figure in the artists’

collective known as Atis Rezistans and a broader movement known as the Sculptors of Grand Rue.Eugène’s large-scale collective sculptural work is a permanent exhibit at the International Museum of Slavery in Liverpool. His work has been shown at the Muesum of Ethnography, Geneva; at the Parc dCe la Villette,
Paris; the Fowler Museum, UCLA, Los Angeles; Nottingham Contemporary, UK and at the Grand Palais, Paris.
His work was included in the Haitian Pavillions at the 54th Venice Biennale.
Eugène is the co-director of the Ghetto Biennale, which has been held in Port-au-Prince since 2009.
Leah Gordon has been photographing Jacmel, Haiti’s carnival for the past 20 years, and is also the

co-director of the edgy Ghetto Biennale in Port-au-Prince. Gordon’s film and photographic work has

been published and exhibited internationally at the Museum of Contemporary Art, Sydney; the

Art, Fort Lauderdale. She was a curator for the Haitian Pavilion at the 54th Venice Biennale; was the

co-curator of Kafou: Haiti, History & Art, at the Nottingham Contemporary; on the curatorial team for

‘In Extremis: Death and Life in 21st Century Haitian Art’ at the Fowler Museum, UCLA and will be the