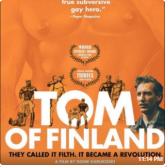 TOM OF FINLAND (with English sub-titles)

Tom of Finland is a 2017 Finnish biographical drama film directed by Dome Karukoski and written by Aleksi Bardy. It stars Pekka Strang as Touko Laaksonen, better known as Tom of Finland, a Finnish homoerotic artist. Tom of Finland premiered on 27 January 2017, at Gothenburg Film Festival and 24 February 2017, in Finnish cinemas. It was selected as the Finnish entry for the Best Foreign Language Film at the 90th Academy Awards, but it was not nominated.

Touko Laaksonen returns home to Finland after serving in World War II. In post-war Helsinki, he makes a name for himself with his homoerotic drawings of muscular men. Before finding fame, he finds challenges from his sister and Finnish society due to his art. See Trailer https://youtu.be/TKFA4WrPlfo